Food for the Soul – Money on Canvas 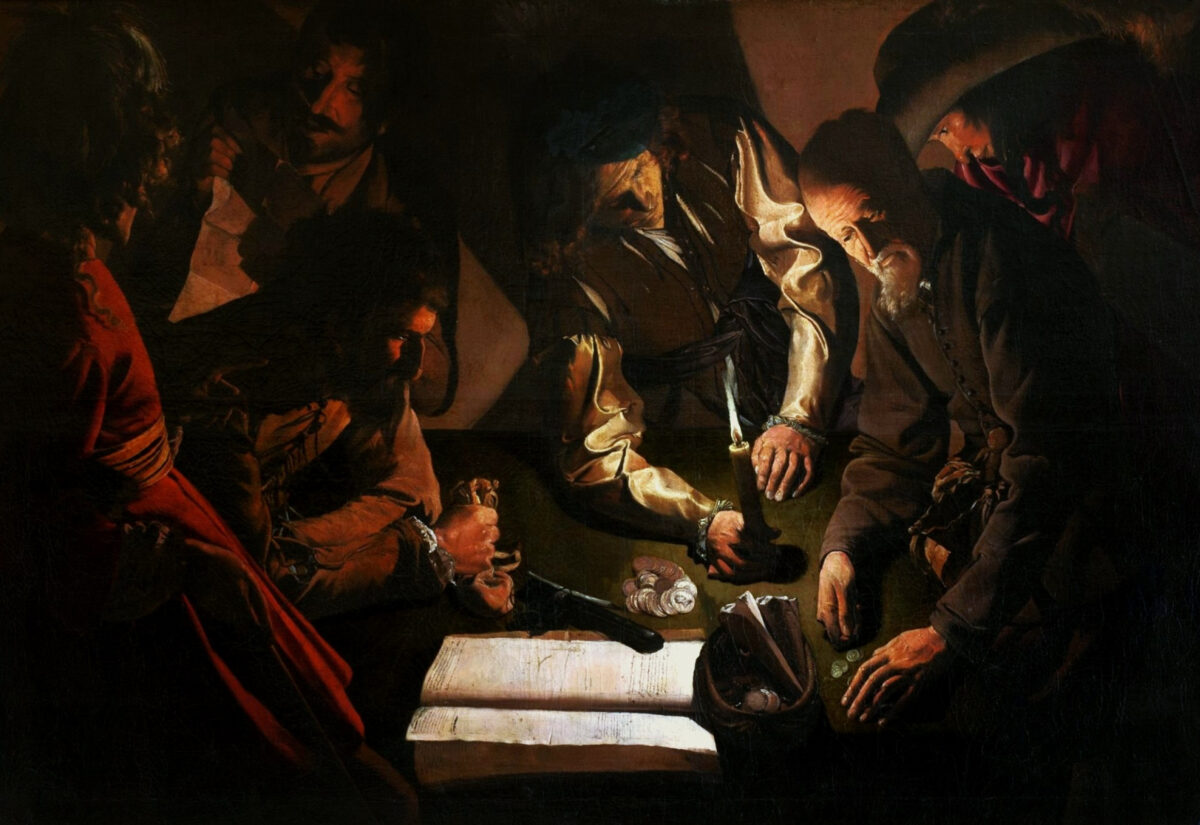 Ever since precious metal coins were invented as a convenient alternative to barter, from Phoenicia to ancient China, they have become a preferred way of paying for goods. In 1828, an eighteen-year-old hunter on a shooting trip in the English countryside of Hampshire discovered a hoard of about a hundred gold coins. These beautiful gold thrymas (shillings) are now displayed in the Ashmolean Museum in Oxford, which acquired the so-called “Crondall Hoard” in 1944. The coins date to about AD 650. It is estimated that, according to the laws of the time, the value of these hundred gold pieces would have represented the compensation for killing a man.

Gold has always been a precious metal of choice, not only as currency but also as jewelry, especially for special occasions. There is a charming representation of a goldsmith and his clients in a 15th-century painting, which, for a long time, was thought to be a picture of St. Eligius, a patron of goldsmiths; later, the halo over his head was discovered to be a 19th-century addition. The carefully rendered face of the goldsmith is now considered to be a portrait of a real jewelry maker, Willem van Vleuten, a Flemish goldsmith who worked for Philip the Good, Duke of Burgundy, and who was commissioned to create adornments for the 1449 marriage of his niece Mary Guelders to James II, the King of Scots. In the painting, the shelves of this artisan are stocked with his glittery creations, and there is a stack of gold coins on the table—perhaps as currency or even as precious metal for future wedding bands.

In the medieval and Renaissance eras, paintings were mostly devoted to portraits of patrons, religious and mythological scenes, and images of nature. Less often, they would represent something to do with the mundane subject of money. However, this changed in the 16th and 17th centuries. The merchant social class started flourishing, and after the Reformation in central and northern Europe, when artists lost their church commissions, they began focusing on more secular topics. The art world thus gained countless representations of ordinary life at all levels of society. Images of coins as symbols of a sitter’s profession or as a commentary on societal changes started to crop up in paintings, both commissioned and allegorical.

A perfect example of such a painting is a very famous canvas from the Louvre—The Money Lender and His Wife—painted in the early 16th century by Quentin Matsys (also called Massys). Matsys spent a large portion of his life in the port of Antwerp—a city that became a center of trade routes and political activities for refugees from both the Spanish Inquisition and the Reformation movements in the north. All this commerce and movement required banking activities, and this is a portrait of a couple whose family business is exactly that: money lending. The attributes of this profession are right there: coins, scales (to determine the value of metal in the coins), and some pearls that would be a perfect portable currency as well. The wife is ostensibly reading a religious book, but she is really leaning toward her husband, who is weighing the coins with utmost concentration. Business is obviously good: You can see some people, perhaps customers, visible through an open window and as a reflection in the mirror. There is also a calm balance—both the commercial and the religious activities of the couple are taking place at the same time in perfect harmony. This painting was much admired, copied, and referred to in later art.

To keep connected with us please login with your personal info.

Enter your personal details and start journey with us.

New membership are not allowed.